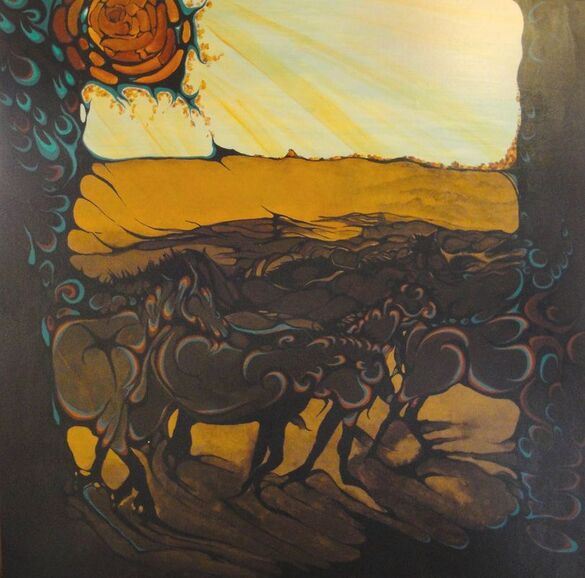 Running Canyon
I began to think of the dream world as a world that formed or was in a parallel continuum with that of the waking or physical world. What I also experienced was a connection or an interaction between these worlds. One world can and did influence and affect the other and this interaction could go either way. One of the most obvious areas where I saw this interaction take place was through my art. Dream visions and symbols began to pass through my body, out the paintbrush and onto the canvas. In reverse, the same was also true. Paintings that waited unfinished on the easel began to find their way into my dreams where the next layer of their becoming would be revealed through symbols or directed by other participants of my dreams. This has remained an ongoing occurrence and reality.

The arrival of the dream also announced the arrival of a certain level of duality that would come to take up permanent residency within my art work. Two or more worlds began using the canvas as a third world in which to meet and morph into something altogether new.   At the time, I had no further insight or discerned no further meaning about what this duality meant. I simply was becoming aware of its existence.

The dreams became like a storyteller, reading life back to me and providing me not only a vehicle with which to examine my life, but also with the understanding that the creation of the dream world is shared by numerous storytellers and writers. I began to wonder about this dream world, and about the web of existence that extends beyond the physical and serves to make contact with and enlighten the spiritual. What was I really coming into contact with through these dreams? It often felt as if I was being guided or pointed in a certain direction and yet the dreams spoke with symbols and meanings that were not always easy to discern.