inside the belly of the dragon (melt) 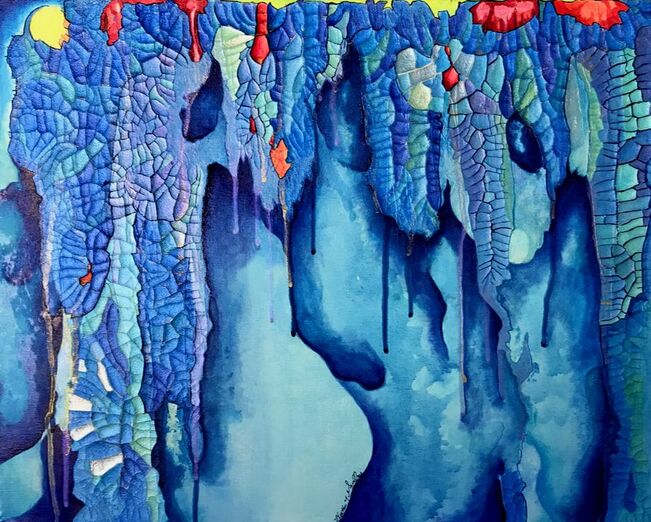 At the time that the dreams returned, the third Dragon made its way onto my body. This one is the largest of the three and connects the previous two incarnations that reside on my skin. This time, when I chose to place the Dragon on my body, I chose one that was asleep, resting until the time was right to awaken. Shortly after placing this image on my body I had the following dream:
Dream - Inside the Mountain of the Dragon (1995)
I wake in the dream to a feeling that is unfamiliar to me. There is something different about the physical space that I am in. There is no light and there is the strong smell of deep, rich earth. A voice begins to speak and I hear it coming from all directions. I am surrounded and enveloped by it. It is coming from the ephemeral physical space that I am surrounded by. The voice surrounds me and is reverberating through me. At the same time that the voice begins to speak, a small yellow light begins to glow directly in front of me. It continues to grow in intensity with the coming of the voice. The voice tells me that I had been taken inside the Mountain of the Dragon. It speaks to me of how it is possible that I am standing inside a mountain and sharing space with the physical matter of the earth. I am told that I was of the Dragon and that it was important to remember the time before the one that lives now. As the voice finishes speaking, the glowing light that had begun with its voice ceases and a small statue of a golden dragon remains suspended and spinning in space. I extend my hand and close it around the golden shape of the dragon. As it lands in the palm of my hand, the figure begins to melt and the liquid permeates the boundary of my skin. I feel the golden liquid making its way through my bloodstream. Once it has filled all of my veins and circulatory system I too begin to glow golden and begin to slowly rotate in space.