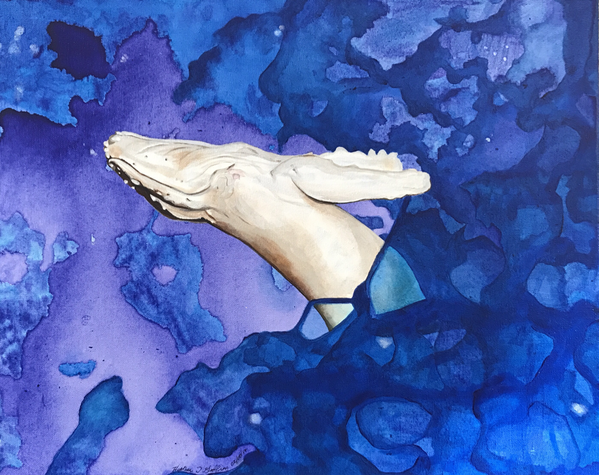 16" x 20" / acrylic on canvas / $400
In the dream, it is night and I am looking out a window which is very high above the ground.  The Moon is full and bright and hanging above a vast expanse of water.  When I look down I see that the expanse of water reaches to the foundation of the building.  From my viewpoint high above there is no shoreline that is visible.  There is only water as far as my eye can see.  There is a brief moment when my thinking mind kicks in and I wonder if the building that I am in is rising from the Ocean herself.

I turn from the window to look inside the room in which I am standing.  I am in a small bathroom and my young son is with me.  Although I understand that the room I am in is a bathroom, I also understand that it is something else.  It resembles a long hallway and leaves me with a strange and surreal feeling that I am somehow within a tunnel.  Everything in the bathroom is white in color.  Everything in the bathroom is pristinely clean and emanates with the same opalescence as the Moon.

A few moments later I heard the movement and sound of wind.  It is a whistling sound which is progressively getting louder and stronger. Within a few moments, a large white whale falls from the heavens and into the water.  There is a great splurging of water which is displaced and set in motion.  In the splash and displaced water that results from the whale’s arrival, I begin to see a multitude of shapes and shadows surfacing from the depths.  The water is filled with a multitude of creatures. As I look at the creatures, I realize that some of them are from times that we consider to be pre-history.  At first I think that all of the creatures are from times past; and then I realize that there are also present day animals and animals that I have never seen or heard of before.  Somehow, I understand that they are the creatures and beings that are still to come, and they have not yet been seen on our present day earth.  Some of the creatures begin to surface and walk upon the land.  As I am watching them walk upon the earth I realize that they are entering the building that I am in.  They ascend the internal structure of the building and find me and my son in the white bathroom. One by one, they singularly parade by us, each one pausing to ensure that eye contact has been made as it passes by and exits through the window back into the primordial waters from which it came.

The final creature, which is similar in shape to that of monkey and is entirely white in color, jumps onto the sink near where I am standing and waits for me to look at it.  We lock eyes and I see my own eyes reflected in the creature’s face. I then realize that we are standing in front of a mirror and the reflection shows that we share the same eyes.  In as much as we are different, we are the same.  We are reflections and images of one another. The actions of one will affect the world of the other.   The creature moves toward the window, takes one last look and then is gone.   I watch as the water enfolds and engulfs the creatures of my dream and returns them to the place of their origins.  The Moon's light begins to fade and I am washed in darkness and sleep.