olga and her chickens 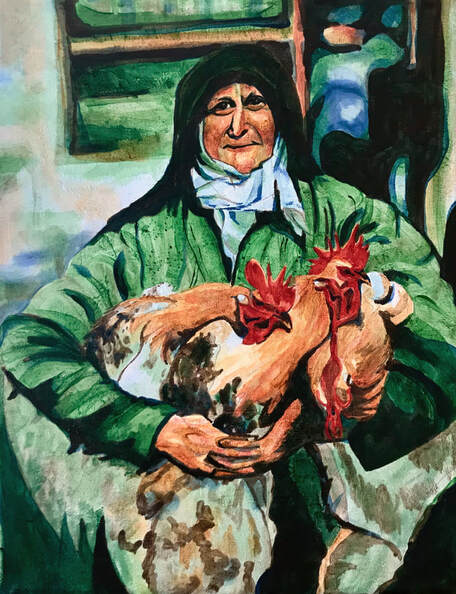 One week ago, while I was painting I began to feel a strange restlessness. Perhaps restlessness is not quite the correct word, but it is as close as I have been able to get to describing the feeling of experiencing the act of painting being offbeat. There have certainly been times before when I have been painting and I have had the experience of uncertainty. In times like those my typical response has simply been to keep painting and let whatever is going on work its way through me, my hands, the paintbrush, the paints and the canvas. Honestly, that is how I process much of my internal workings – trust the paint and the process and don’t second guess it. Last weeks experience seemed different. I began to feel like I was on automatic pilot. I realized that I have been painting for long enough now that even if my head and heart were not quite in it I could fake it. Truthfully it would have probably ended up being an okay painting but “faking it” has never been something that I have consciously aimed for and as far back as I can remember, for me, painting has always been a process of revealing. It was a strange moment for me to realize that what I had revealed to myself was that I was in some way, shape or form…faking it.

So…I grabbed the closest prepped canvas and began Olga. If you would have told me the week before that I would make a painting like "Olga and her Chickens," I might have started laughing. If you look back over the span of my paintings, I have never used a similar color palette, nor have I ever painted a subject like her. I had a lot of fun talking with Olga and watching her start to come to life during those first few days. During those initial days I also began having the first symptoms of the flu. I went on for a couple of days trying to convince myself that I was not getting sick or that I could kick it relatively quickly. By Monday, I was completely down and in bed with intense body aches, fever, sweating, chills, coughing, and all the other fun flu related activities. I kept thinking about Olga and her chickens. At times all I wanted was for Olga to make her chickens into some soup and show up at my doorstep.

​During the next three days I had some pretty intense dreams. A couple of them involved me being in the attic (which in the dream I knew was my own head) and watching as a recently departed teacher boxed up a bunch of stuff that was not mine. As he continued boxing stuff up and at times throwing it down a flight of stairs he was cursing and grumbling under his breath and saying, “You can’t keep holding onto this stuff. You have to get rid of it. You have to make room and space for what is coming.” So, for 3 days I continued sweating and living more in the dream world than I was in the waking one.
​
Today, when I woke up, I knew I was on the uphill climb. Although my voice still sounds strange and I am still on the weaker side (I lost 7 pounds in 5 days – it was intense) I felt good enough to go into the studio and talk with Olga. After 2 hours of painting she and the chickens were done. There is a lot more I could say about Olga – who I think she is, why she showed up when she did, how come she loves her chickens so much and on and on, but for now, I think it is enough for you to see her and for her to see you. I also think it might be time for a nap.

I made a cup of tea prior to sitting down to write this and the tea bag oracle said, “Intelligence and Intuition are two friends.” I almost made it the title of the painting, but then…that did not seem quite fair to Olga or the chickens.​